About Address Residences The Bay

Exuding the ultimate exclusivity and sophistication, Address The Bay is a gorgeous new residential project by Emaar Properties, and will be one of the tallest towers in the Miami-inspired area of Emaar Beachfront. The branded development was launched in Q2 2022, offering prospective real estate buyers the opportunity to choose from an exquisite collection of thoughtfully crafted unfurnished apartments in 1-3 bedroom configurations, with living areas ranging from 803 sq. ft to 1,970 sq. ft. According to the master developer, Address The Bay will have approximately 50 floors, in addition to a podium which will span across levels 15-17. The podium will house an ultra-luxury 5-star hotel with unparalleled sea views. At the same time, the upper floors of the building will house four 2-bedroom back side apartments, the frontal part – 3-bedroom corner units and the middle section – two 2-bedroom properties. Occupants will be treated to a gorgeous lobby and an array of excellent lifestyle amenities for the utmost comfort of its residents.

Treating its occupants to world-class leisure and recreational experiences, Address The Bay will provide access to various amenities onsite, and a number of facilities within the Emaar Beachfront development. These can be found below: 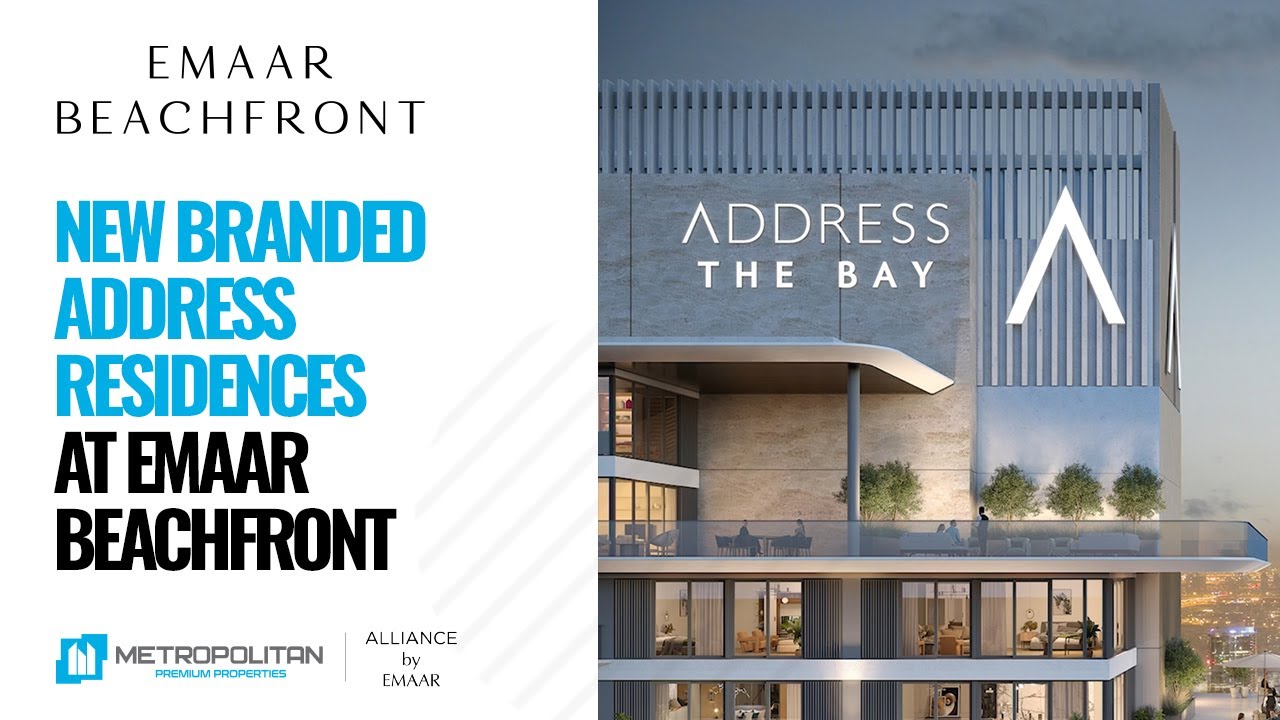 Address The Bay is part of Emaar Beachfront, which houses Beach Mansion, Grand Bleu Tower and Palace Beach Residence, among other upscale developments. The development is connected to the rest of the city via one of the major highways in Dubai – the Sheikh Zayed Road. In addition, there are an array of bus stations within a 20-minute walk away, which include Mina Al Siyahi, Le Meridien Hotel 2 and Mina Al Siyahi, Le Meridien Hotel 1, as well as the Mina Seyahi tram station.

As well as all the above, once the construction of the envisioned Emaar Beachfront area is completed, its residents will have easy access to an internal monorail, which will be connected to the flagship Bluewaters Island and Palm Jumeirah areas. The master plan also includes a pedestrian bridge with cycling and running tracks, alongside water boat stations to facilitate commutes around Dubai, as an alternative to using a car or traditional public transport.

Prospective real estate buyers will be keen to learn that there are plenty of social amenities that can be found within a  30-minute walk of the development. These are as follows:

Address The Bay will also boast close proximity to some of the most luxurious hotels and leisure offerings in Dubai, as Emaar Beachfront is located between Dubai Marina and Palm Jumeirah. These include, but are not limited to: When investing in an off-plan property worth at least AED 2,000,000 (USD 545,000), buyers automatically become eligible for a Golden Visa. This type of residency enables its holder to live, work and study in the UAE without the need for a local sponsor, and also provides the holder the opportunity to bring their family to Dubai as well. You can also purchase an apartment in Address The Bay with the purpose of renting it out, using a property management service, and generate a lucrative income on a regular basis. According to Property Finder, as of Q2 2022, the gross ROI in Emaar Beachfront has reached 6.2%, while the starting rental price is AED 100,000 (USD 27,000) per annum. Leave a Request
Get Brochure
Get All Floor Plans